The “National Drug Report 2022” was launched by Türkiye. The publicly accessible Report narrates the counter narcotics efforts of Türkiye with the comparative statistical data. The English version of the Report can be accessed via the link: Turkiye-National-Drug-Report-2022.pdf (narkotik.pol.tr).

Key facts arising from the 2021 seizure data (in comparison to 2020):
In 2021, the total number of the heroin increased by 61.1%, reaching record-high 22,202 kg. The Report indicates that a sharp decrease in 2020 was followed by an upward trend in 2021 resulting from the reopening of land trade routes. Although not proportionate, the number of heroin incidents and suspects gradually decreased from 2019 to 2021.
The amount of acetic anhydride seized in 2021 nearly tripled from 2020 reaching 36,253 litres. The heroin precursor was mainly diverted towards Iran, Afghanistan and Northern Iraq.
The Report referred to the worsening methamphetamine situation in Türkiye since its first seizure in Istanbul in 2009. Significant amounts of liquid methamphetamine were seized in the last two years. The Report concluded that Türkiye became a destination country for methamphetamine trafficking with no indication of its further extension to Europe via the Balkan route through the territory of Türkiye. 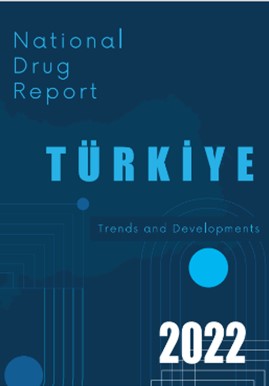